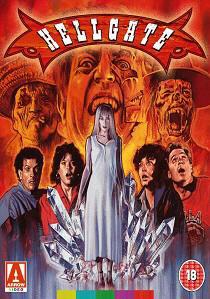 Legends abound of The Hellgate Hitchhiker. So the story goes, a beautiful young woman was once brutally defiled and murdered by a biker gang. Now, returned from the dead, she wanders the roadside luring unsuspecting motorists to their doom...

Refusing to heed the warnings of locals, a group of college friends set out on a cross-country road trip looking for fun and frolics. But they get much more than they bargained for when they wind up in the abandoned mining town of Hellgate and hemmed in by hordes of the undead!

Providing gore and gags in equal measure, Hellgate, released on dual format DVD & Blu-ray on 3rd February 2014 courtesy of Arrow Video, recalls the good old days of early 90s fright flicks and challenges other gleefully twisted flicks such as Re-animator and Return of the Living Dead for sheer grisly delirium!

BD
Will Smith and Martin Lawrence are back on the case in the roles that launched the dynamic duo to global superstardom in Bad Boys For Life, arriving on DVD, Blu-ray and 4K UHD 25th May 2020 from Sony ... END_OF_DOCUMENT_TOKEN_TO_BE_REPLACED
Hot PicksView