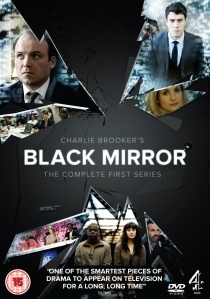 NewsTV SeriesDramaThriller
News Article Go back to homepage
Charlie Brooker, the author of E4's BAFTA nominated Dead Set, returns with a new three-part 60 minute mini-series Black Mirror, which will be released for the first time on DVD on 27th February 2012 from 4DVD.
Charlie Brooker
4DVD
Unknown
27/02/2012
Thank you for supporting DVD365.net when you order using the link(s) below. As an Amazon Associate we earn from qualifying purchases
Buy DVD
Information

Charlie Brooker, the author of E4's BAFTA nominated Dead Set, returns with a new three-part 60 minute mini-series Black Mirror, which will be released for the first time on DVD on 27th February 2012 from 4DVD.

Black Mirror uses the rapid advancement of technology as a starting point to explore the various ways this evolution impacts our lives. With two of the three films written by Charlie and the third by Jesse Armstrong (Peep Show, The Thick of It, Four Lions), Black Mirror scrutinises our obsession with technology.

Over the last ten years, this area of human endeavour has transformed almost every aspect of our lives before we've had time to stop and question it. In every home; on every desk; in every palm - a plasma screen; a monitor; a Smartphone - a black mirror of our 21st Century existence. Our grip on reality is shifting. We worship at the altars of Google and Apple. Facebook algorithms know us more intimately than our own parents. We have access to all the information in the world, but no brain space left to absorb anything longer than a 140-character tweet. Black Mirror is a contemporary British re-working of The Twilight Zone with stories that tap into the collective unease about our modern world. The three stand-alone dramas are sharp, suspenseful, satirical tales with a techno-paranoia bent.

A twisted parable for the Twitter age, The National Anthem looks at how life is very much harder for the rich and supposedly powerful now that information is disseminated so quickly and public opinion is so loud, powerful and quick to change. It's a political thriller in which the Prime Minister faces a huge dilemma; and has to choose between bowing to the pressure of public opinion or following his own moral compass.

Set in a sarcastic version of a future reality, 15 Million Merits is a satire on entertainment shows and our insatiable thirst for distraction. In this world, everyone is confined to a life of strange physical drudgery. The only way to escape this life is to enter the 'Hot Shot' talent show and just pray you can impress the judges.

The Entire History Of You, written by Peep Show's Jesse Armstrong, is set in an alternate reality where everyone has access to a system which records everything they do, see or hear. You need never forget a face, a holiday or a night out again... but is that always good thing?