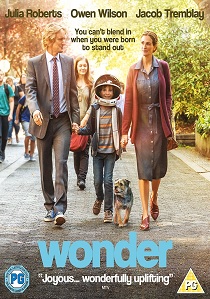 Based on the New York Times bestseller, Wonder, released on DVD, Blu-ray and 4K UHD 26th March 2018 from Lionsgate Home Entertainment, tells the inspiring and heartwarming story of August Pullman. Born with facial differences that, up until now, have prevented him from going to a mainstream school, Auggie becomes the most unlikely of heroes when he enters the local fifth grade. As his family, his new classmates, and the larger community all struggle to find their compassion and acceptance, Auggie's extraordinary journey will unite them all and prove you can't blend in when you were born to stand out.

The story of a 10 year-old boy with facial differences becomes a multifaceted look at what it means to be human in the film adaptation of R.J. Palacio's bestseller Wonder. Golden Globe nominee Jacob Tremblay (Room) tackles the one-of-a-kind role of Auggie Pullman, whose birth defects and multiple surgeries have kept him out of school -- until now. Jettisoned into what is for him the brave new world of the 5th grade, Auggie steps into an unexpected journey.

All Auggie ever wanted was to be an ordinary kid, but as his sister keeps telling him, you can't be ordinary when you were born to stand out. Though he once found solace inside a space helmet, suddenly he must face a whole universe of gawking kids who don't yet know how to face him back. Now, in a year by turns funny, tough and beautiful -- Auggie and all around him are transformed by the things that count most: friendship, courage and the everyday choice to be kind to everyone in your path.

The film is directed by Stephen Chbosky (The Perks of Being a Wallflower), who, along with Steven Conrad (Unfinished Business) and Jack Thorne (Harry Potter and the Cursed Child), adapted R.J. Palacio's bestseller. The producers are Todd Lieberman, p.g.a. and David Hoberman, p.g.a. (both behind Beauty and the Beast, Stronger, The Fighter) of Mandeville Films. The executive producers are Participant Media's Jeff Skoll and Robert Kessel; Michael Beugg La La Land, Little Miss Sunshine, Up In the Air), R.J. Palacio, and Mandeville Films' Alexander Young Beauty and the Beast, Stronger, Life as We Know It). 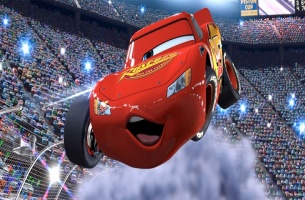 HotUHD
Pixar Animation Studios presents Cars, the high-octane adventure comedy that shows life is about the journey, not the finish line, zooming in for the first time on 4K Ultra HD 19th July 2021, exclusive to Zavvi. END_OF_DOCUMENT_TOKEN_TO_BE_REPLACED
Comments
Hot Pick