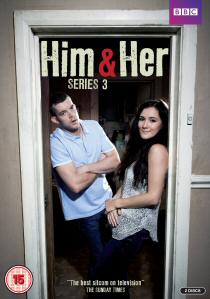 NewsComedy
News Article Go back to homepage
Things get exciting for Steve as he prepares to propose to Becky in Him & Her - Series 3, available to own on BBC DVD from 9th December 2013
Camille Coduri, Ricky Champ, Kerry Howard, Joe Wilkinson, Sarah Solemani, Russell Tovey
Richard Laxton
Matthew Justice, Lyndsay Robinson, Kenton Allen, Stefan Golaszewski
2entertain
Unknown
09/12/2013
#HimAndHer Series 3
Thank you for supporting DVD365.net when you order using the link(s) below. As an Amazon Associate we earn from qualifying purchases
Buy DVD
Information

Things get exciting for Steve as he prepares to propose to Becky in Him & Her - Series 3, available to own on BBC DVD from 9th December 2013.

Fighting jealousy from Becky's sister and intimidation from her dad, Steve tries to keep his proposal a secret until their anniversary. But, with her sister and father hostile towards the relationship, will his plans be derailed?

Starring Russell Tovey (Being Human), Sarah Solemani (The Wrong Mans), Kerry Howard (Reggie Perrin) and Joe Wilkinson (Live At The Electric), Him & Her is a comedy about an unemployed 20-something couple who spend their days lazing around at home, eating, drinking, bickering, having sex and generally doing their best to ignore the big bad world outside their front door. From Steve and Becky's first date to Steve's proposal, we see their love grow amidst the filth, the fast food and the drinking.

Him & Her - Series 3 is out on BBC DVD on 9th December 2013 and extras include a Series 2 recap and video diaries.