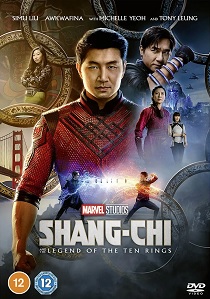 NewsActionFantasyAdventureMarvelDisney
News Article Go back to homepage
Marvel Studios' Shang-Chi and The Legend of The Ten Rings, released on DVD, Blu-ray and 4K UHD 15th November 2021 from Walt Disney Home Entertainment, stars Simu Liu as Shang-Chi, who must confront the past he thought he left behind when he is drawn into the web of the mysterious Ten Rings organisation.
Simu Liu, Tony Chiu-Wai Leung, Awkwafina, Ben Kingsley, Fala Chen, Michelle Yeoh
Destin Daniel Cretton
Kevin Feige, Jonathan Schwartz
Walt Disney Home Entertainment
2 hours 7 minutes
15/11/2021
#ShangChi #TheLegendOfTheTenRings
Thank you for supporting DVD365.net when you order using the link(s) below. As a member of the Zavvi affiliate program we earn from qualifying purchases
Buy DVD
Buy BD
Buy UHD
Information

Marvel Studios' Shang-Chi and The Legend of The Ten Rings stars Simu Liu as Shang-Chi, who must confront the past he thought he left behind when he is drawn into the web of the mysterious Ten Rings organisation. The film also stars Tony Leung as Wenwu, Awkwafina as Shang-Chi's friend Katy and Michelle Yeoh as Jiang Nan, as well as Fala Chen, Meng'er Zhang, Florian Munteanu and Ronny Chieng.

Shang-Chi and The Legend of The Ten Rings is directed by Destin Daniel Cretton and produced by Kevin Feige and Jonathan Schwartz, with Louis D'Esposito, Victoria Alonso and Charles Newirth serving as executive producers. David Callaham & Destin Daniel Cretton & Andrew Lanham wrote the screenplay for the film, which opens in theaters on July 9, 2021.

Shang-Chi and The Legend of The Ten Rings is released on DVD, Blu-ray and 4K UHD 15th November 2021 from Walt Disney Home Entertainment. HotDVDDIGITAL
When the world is locked down, they'll find their ticket out in Locked Down, released on DVD 7th June 2021 from Warner Home Video. END_OF_DOCUMENT_TOKEN_TO_BE_REPLACED
Comments
BD Releases News Pick