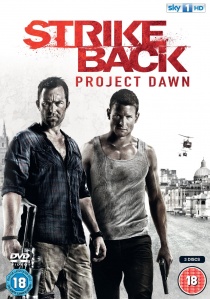 After the successful second series on Sky 1 HD the high-octane drama blasts back for a second series. Pumped with added extra featurettes and fight scenes, Strike Back: Project Dawn is available from the 14th November 2011 from 2entertain on DVD and Blu-Ray for that perfect action-packed Christmas gift.

Scott and Stonebridge plunge into a terrifying siege in a Delhi hotel; mount an undercover operation to derail a weapon heist in Cape Town by a ruthless former IRA operator; take up arms against a ferocious Sudanese militia to rescue a British aid worker; track a treasonous spy in a savage Balkan gangster state; and finally, race to stop a huge-scale double suicide bomber attack in Budapest, orchestrated by the ingenious, merciless Latif. As Section 20 finally confront their nemesis, prey becomes predator in a staggering series climax...