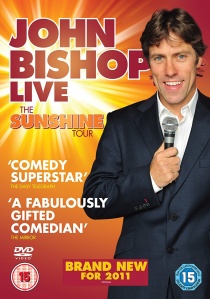 NewsStandup Comedy
News Article Go back to homepage
John Bishop has been enjoying his time in the sunshine, with his phenomenally fast rise to fame. From October 2010 to June 2011, he toured the UK and now audiences have the opportunity to enjoy John Bishop Live - The Sunshine Tour, released on DVD, Blu-ray and download on 14th November 2011 from 2entertain.
John Bishop
Paul Wheeler
Emily Saunders, Gary Matsell, Victoria Lepper
2entertain
Unknown
14/11/2011
As an Amazon Associate we earn from qualifying purchases
Buy DVD
Buy BD
Information

John Bishop has been enjoying his time in the sunshine, with his phenomenally fast rise to fame. From October 2010 to June 2011, he toured the UK, including arenas (as well as 8 shows at the Liverpool Echo Arena) with the sellout show Sunshine performing to over 400,000 people. His debut DVD, John Bishop Live - The Elvis has left the Building Tour, which was released last year, is the fastest selling debut stand-up DVD ever. It remains one of the top-sellers of the last year and is now in the top ten selling stand up DVDs of all time. The show was recently watched by 3m viewers when it was aired on BBC One.

The combination of John Bishop's ability to keep the laughs coming along with his unique brand of observational humour, his undeniable charm and unrivalled gift of creating a relaxed atmosphere means that the feel good factor of spending an evening in his company is absolutely priceless. Now audiences have the opportunity to enjoy that same experience with all the family, in the comfort of their own home, with John Bishop Live - The Sunshine Tour released on DVD, Blu-ray and download on 14th November 2011 from 2entertain.

In this show John shares anecdotes about the ways in which his life has changed because of fame, he confesses to what his kids really think of him and he explains why this is his time in the sunshine. Exclusive to the DVD and Blu-ray, extra content includes a behind-the-scenes set tour, the making of the Night Fever video and a documentary about the Royal Albert Hall gig.

John explains: "It's been a great journey and the Sunshine Tour gave me a great opportunity to share the joy, fun and madness of the whole experience of the last year."

Recent TV appearances include John Bishop's Britain (BBC One), series one & two; Series two is currently being broadcast on BBC One and has been averaging weekly audiences of 6.5 m (including repeats); A League of their Own (Sky One), Michael McIntyre's Comedy Road Show (BBC One), Live at The Apollo (BBC One), guest host on Have I Got News For You (BBC Two).

DVD
The BAFTA-winning hit Unforgotten, released on DVD 26th April 2021 from BBC Worldwide, returns for a fourth series, as Cassie and Sunny investigate a cold case with alarming links to the police force. END_OF_DOCUMENT_TOKEN_TO_BE_REPLACED
Top PicksView