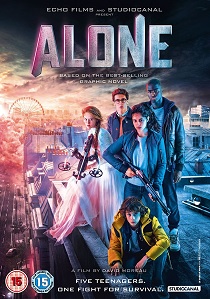 NewsScience FictionDramaFantasyWorld Cinema
News Article Go back to homepage
After the sudden and unexplained disappearance of the inhabitants of Fortville, five adolescents are left alone in the city. They have to learn to survive in a world without adults that is familiar, but also mysterious and even hostile..
Sofia Lesaffre, Stéphane Bak, Jean-Stan Du Pac, Paul Scarfoglio, Kim Lockhart
David Moreau
Abel Nahmias
StudioCanal
1 hour 33 minutes
04/09/2017
#Alone
Thank you for supporting DVD365.net when you order using the link(s) below. As an Amazon Associate we earn from qualifying purchases
Buy DVD
Information

When 16-year-old Leila wakes up late one morning, she finds the neighbourhood of Fortville silent and deserted. Everyone has mysteriously disappeared. Staring to wonder if she was the unique survivor of an unexplained disaster, Leila discovers four other teenagers: Dodji, Yvan, Camille and Terry. Together they will try to understand what happened and learn to survive in their world which has become hostile... But are they truly alone?

The film is based on the eponymous fantasy adventure comic book series written by Fabien Vehlmann, illustrated by Bruno Gazzotti and published by Dupuis. The critically acclaimed comic book series, which has received two awards at the Angouleme International Comics Festival, has a growing readership. More than 100,000 copies of Volume 9, which was published last October, have already been sold.