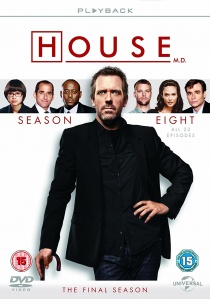 Proving that all great things must come to an end, David Shore's masterpiece medical drama sings its bittersweet swan song, as House Season Eight checks in on Blu-Ray and DVD on 22nd October 2012, courtesy of Universal Playback.

Swapping the surgery for the slammer, House Season Eight sees our brilliant yet socially challenged maverick doctor become a victim of the Princeton penitentiary system. Temporarily incarcerated for his various misdemeanours of last season's cliff-hanger finale, House's future looks less than healthy. In this gripping final instalment, the residents of Princeton-Plainsboro Teaching Hospital face some of their most complex challenges yet.

House Season Eight witnesses the arrival of an impressive new cast roster. While our meticulous medic is serving time he finds it harder than anticipated to turn his back entirely on the medical profession. His passion is resuscitated in an encounter with infirmary doctor Jessica Adams, played by Odette Annable (Cloverfield, The Unborn, Brothers & Sisters). A recurrent role is also played by Charlyne Yi (Knocked Up, 30 Rock), who portrays bright but timid resident, Chi Park.

Directed by Greg Yataines whose formidable production credits include the likes of Bones, Heroes, Prison Break and Grey's Anatomy and blessed with the writing talent behind Ally McBeal and Law and Order; House Season Eight is set to become the most memorable season to date.

This critically acclaimed series centres around the life and work of an antisocial maverick doctor who specialises in diagnostic medicine, prepared to do whatever it takes to solve the puzzling cases that come his way. Equipped with an unprecedented flair for the obscure and paradoxical and a crack team of medical professionals by his side, the brilliantly troubled physician is used to being in charge. In the gripping climax of this outstanding series, House's ability to control his haphazard existence is coming apart at the seams. In the shows explosive last hurrah it remains to be seen which members of the team will make it out alive.

Bid a fond farewell to the final 22 episodes of a television legend (including over an hour of exclusive bonus features), as the epic conclusion to the once most watched show in the world; House Season Eight is paroled on Blu-Ray and DVD on 22nd October 2012.