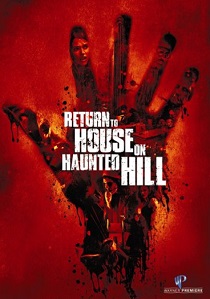 Warner Premiere, the direct-to-consumer production arm for Warner Brothers Pictures and Warner Home Video, creaks open the doors for the highly anticipated sequel Return To House On Haunted Hill, produced by Joel Silver's genre banner, Dark Castle Entertainment. A roller-coaster ride of terror, the film exhumes the evil spirit of Dr. Vannacutt and his diabolical nurses and orderlies. Unimaginable horrors are unleashed on a whole new group of unsuspecting victims on 15th October, just in time for Halloween. This is the perfect film for those who think they can handle a slaughterhouse of blood, gore and terror.

From award-winning director Victor García (El Ciclo), Return To House On Haunted Hill features an ensemble cast including Amanda Righetti (Entourage, The O.C.), Erik Palladino (CSI, Over There, ER), Cerina Vincent (Bones, Toxic, Cabin Fever), Tom Riley (I Want Candy), Andrew Lee Potts (Primeval) and Steven Pacey (Spooks). Horror icon Jeffrey Combs (House on Haunted Hill) reprises his role as the evil Dr. Vannacutt. "Return To House On Haunted Hill is a thrilling, edge-of-the seat ride that will allow fans to unleash their imaginations in the same vein as the original Vincent Price film, appealing to true die-hard horror fans" said Diane Nelson, President of Warner Premiere. This is the first title tied to the Warner Premiere partnership with Joel Silver's Dark Castle Entertainment and the hands-on guidance of Joel and director Victor García has delivered a truly entertaining horror film unlike what has been seen before from direct-to-DVD titles.

Return To House On Haunted Hill is a sequel to the theatrical hit House on Haunted Hill, a remake of the Vincent Price horror classic from 1959. House on Haunted Hill (1999) starred Geoffrey Rush, Famke Janssen, Taye Diggs, Peter Gallagher, Chris Kattan, Ali Larter and Bridgette Wilson. The story revolved around a millionaire who offers a group of diverse people $1,000,000 to spend the night in a haunted house with a horrifying past. The film was a theatrical hit and, and has sold-through over 300,000 DVD units to date in the U.K.

Sarah Wolfe was the only living survivor from the massacre at the Vannacutt Mansion, but no one believed her claims that ghosts were responsible for the gruesome murders that took place there. Now her recent and questionable suicide leaves her sister, Ariel, no choice but to devote herself to finding out who - or what - was responsible for her death. Ariel discovers that Sarah sent her the diary of the sadistic Dr. Vannacutt just before she died, offering clues to the diabolical evil that resides within the house. But the diary also makes Ariel a target in a deadly treasure hunt that leads a group of unwitting victims back to the Vannacutt Mansion, reawakening the terror imprisoned within the house on the hill. This time, the house and the evil spirits inside are out to make sure that no one leaves alive.