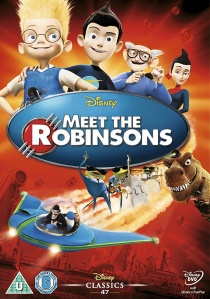 Prepare to be transported into a fantastical new world of discovery, science and adventure when Disney's latest fun-filled animated movie Meet The Robinsons explodes on to Disney DVD on 10th September 2007. Packed with classic villains, crazy characters and laugh-out-loud gags, Meet The Robinsons is a must-see adventure for all the family. And this futuristic tale is aptly also being made available on state of the art Blu-ray DVD at the same time.

Join lovable inventor Lewis, a twelve-year old orphan with a genius IQ, on his quest to find the family he's never known. His search takes him on an unforgettable journey of laughs, adventure and amazing technology, during which he learns the importance of family, believing in yourself and following your dreams. Singing frogs, robotic cats and Tiny The T-Rex will also keep kids of all ages entertained for hours. The film features an A-list range of voices including Academy Award® nominee Angela Basset and Emmy® and Golden Globe winner Tom Selleck.

The adventure continues on DVD with never-before-seen bonus features including Inventing the Robinsons; the story of William Joyce's creation of the characters right through to the animation process and production. There's also a Family Tree Game, deleted scenes and much more.

With lots of laughter, discoveries and zany characters the whole family will love, everyone must Meet the Robinsons on Disney DVD and Blu-ray this September.

Lewis is a brilliant inventor with a surprising number of clever inventions to his credit. His latest and most ambitious project is the Memory Scanner, a machine that will help him find his birth mother so they can become a family. But before he can find her, his invention is stolen by the villainous Bowler Hat Guy and his diabolical hat and constant companion, Doris. Lewis has all but given up hope when a mysterious stranger named Wilbur Robinson whisks him away in a time machine. Together they team up to track down Bowler Hat Guy in what turns into an amazing and hilarious adventure with heartfelt results. The film is based on the book A Day with Wilbur Robinson by William Joyce.

UHD
Fast forward to the 1980s as Wonder Woman's next big screen adventure finds her facing a wide array of foes including Max Lord and The Cheetah as Wonder Woman 1984 flies in on Blu-ray and 4K UHD 22nd ... END_OF_DOCUMENT_TOKEN_TO_BE_REPLACED
Top PicksView