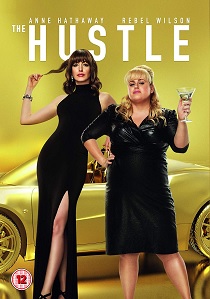 Josephine Chesterfield (Anne Hathaway) is a glamorous, seductive British who has a penchant for defrauding gullible men out of their money. Penny (Rebel Wilson) amasses wads of cash by ripping off her marks in neighbourhood bars. Despite their different methods, both are masters of the art of the fleece so they con the men that have wronged women.

Despite their different methods, the two grifters soon join forces for the ultimate score -- a young and naive tech billionaire in the South of France.

Wilson's talent for physicality and Hathaway's withering wit are a combustible combination as the pair of scammers pull out all the stops to swindle a naïve tech billionaire (Alex Sharp) in the South of France.

The Hustle is released on DVD 2nd September 2019 from Universal Pictures (UK).

DVD
Arriving on DVD and Blu-ray 24th May 2021 from Acorn Media (UK), the hit police corruption drama from the makers of Bodyguard returns as Series Six of Line of Duty sees AC-12 facing their most ... END_OF_DOCUMENT_TOKEN_TO_BE_REPLACED
Hot PicksView