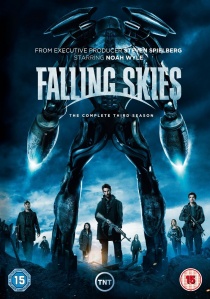 Falling Skies - Season 3, released on DVD and Blu-ray on 14th July 2014 courtesy of Warner Home Video,, continues in the aftermath of an alien attack that has left most of the world completely incapacitated. In the months since the initial invasion, the few survivors have banded together outside major cities to begin the difficult task of fighting back. Each day is a test of survival as citizen soldiers work to protect the people in their care while also engaging in an insurgency against the occupying alien force.

Falling Skies focuses on the resilience of the survivors and their determination to maintain their humanity when all else has been destroyed. It is a tale of endurance, commitment and courage in which everyday people are called upon to become heroes. They may be outmatched, outnumbered and outgunned, but nothing can beat the human spirit. Most of all, the series is about the ties that bind people together in the most difficult of circumstances.

The DVD and Blu-ray contain all ten episodes from the third season of the US sci-fi drama following the aftermath of an alien invasion. with Second Massachusetts Deputy Commander Tom Mason (Noah Wyle) returning to the group three months after leaving on an alien spaceship in order to save his son Ben (Connor Jessup), but finds his loyalty questioned by his fellow colleagues.

UHD
Based on the global blockbuster videogame franchise from Sega, Sonic The Hedgehog, released on DVD, Blu-ray and 4K UHD from 8th June 2020 from Paramount Home Entertainment, tells the story of the ... END_OF_DOCUMENT_TOKEN_TO_BE_REPLACED
Hot PicksView