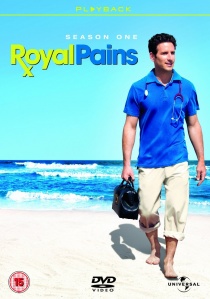 Hank Lawson discovers how the other half live when he becomes medic to the rich and infamous in Royal Pains: Season 1, available on DVD from 2nd August 2010 courtesy of Universal Playback. Having carved a successful life for himself in the big city, with a thriving career in a New York emergency room, a beautiful girlfriend and the requisite swanky apartment, Hank (Mark Feuerstein, TV's The West Wing, The Hustler) has the rug pulled from under him when he is made the fall guy for hospital tragedy.

Having lost everything, Hank moves to the Hamptons with his brother (Paulo Costanzo, 40 Days and 40 Nights, TV's Joey) and quickly ingratiates himself with the well-to-do residents by becoming a concierge doctor catering for their every whim.

Royal Pains became the USA Network's most-watched first season of an original series ever during its original transmission in 2009 and its success looks set to continue with a second season already in the pipeline and the first season arriving on UK screens with the Hallmark Channel. So settle down and watch Hank as he wrestles with his social conscience as well as the needy residents of the Hamptons as he bids to get his complicated life back on track.

A young E.R. doctor is wrongly blamed for a patient's death and subsequently moves to the Hamptons to become a reluctant "doctor for hire" to the rich and famous. When the administrator of the local hospital asks him to treat the town's less fortunate as well, he finds himself walking the line between doing well for himself and doing good for others.

BD
Tom Hardy returns as the lethal protector Venom, one of Marvel's greatest and most complex characters in Venom: Let There Be Carnage, available on 4K Ultra HD, Blu-ray and DVD on 3rd January 2022 from Sony Pictures Home ... END_OF_DOCUMENT_TOKEN_TO_BE_REPLACED
Top PicksView