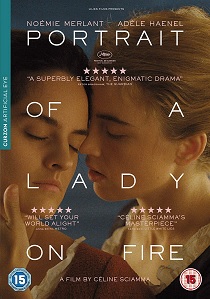 NewsDramaWorld Cinema
News Article Go back to homepage
On an isolated island in Brittany at the end of the eighteenth century, a female painter is obliged to paint a wedding portrait of a young woman as Portrait Of A Lady On Fire is released on DVD and Blu-ray 8th June 2020 from Curzon Artificial Eye.
Noémie Merlant, Luàna Bajrami, Adèle Haenel, Valeria Golino, Christel Baras
Céline Sciamma
Bénédicte Couvreur
Curzon Artificial Eye
2 hours 1 minutes
08/06/2020
#PortraitOfALadyOnFire
As an Amazon Associate we earn from qualifying purchases
Buy DVD
Buy BD
Information

Romance and art entwine in Portrait Of A Lady On Fire, a sumptuous new masterpiece from Céline Sciamma (Tomboy, Girlhood).

Set in late 18th century France, painter Marianne (Noémie Merlant) is commissioned by an affluent countess to paint the wedding portrait of her sheltered but headstrong daughter Héloïse (Adèle Haenel), in the hope it will find her a wealthy husband.

While posing as her hired companion, Marianne is instructed to complete the portrait in secret, observing Héloïse by day and painting her by night. However, as the two women grow closer, their intimacy and attraction begins to blossom, paving the way for a simmering, star-crossed romance.

A heartbreaking period piece told with a distinctly modern feminist energy, Portrait Of A Lady On Fire is the first female-directed film to win the Queer Palm at the Cannes Film Festival, where it also won the Best Screenplay award.

Portrait Of A Lady On Fire is released on DVD and Blu-ray 8th June 2020 from Curzon Artificial Eye.