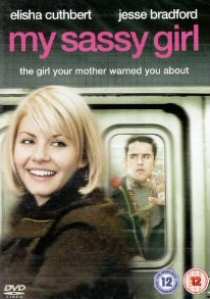 Elisha Cuthbert, beautiful star of smash hit series 24, is My Sassy Girl. An English-language remake of the major Korean box office hit, this offbeat romantic comedy will be released to rent on DVD by Entertainment In Video on 12th August and to buy on 25th August 2008.

Directed by Yann Samuell (Love Me If You Dare), the film also stars Jesse Bradford (Flags of Our Fathers, Swimfan, The West Wing), Chris Sarandon (Dog Day Afternoon, The Princess Bride) and Joanna Gleason (Hannah and Her Sisters, Boogie Nights).

Charlie (Jesse Bradford) is a shy and unassuming Midwestern boy with his life neatly planned. Out of his element in New York City, he is pursuing his dream of landing a job with the Tiller King lawn mower company. Jordan (Elisha Cuthbert), on the other hand, is a brash and outspoken Upper East-sider with a drinking problem who relies on destiny rather than personal responsibility to determine her future.

One day Chris rescues Jordan from falling to her death - and his life is changed forever. Jordan engages her new beau in an unusual and eccentric courtship - but just how many tests will Charlie endure to win the heart of this complicated young woman?

DVD
Disney and Pixar's original feature film Luca, released on DVD, Blu-ray and 4K UHD on 23rd August 2021, is a fun and heartwarming story about friendship, stepping out of your comfort zone and two ... END_OF_DOCUMENT_TOKEN_TO_BE_REPLACED
Top PicksView