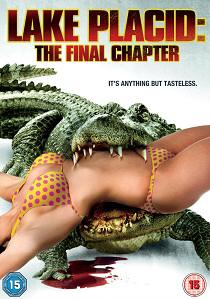 In the film, a rogue game warden (Butler, returning from Lake Placid 3) breaks out her guns after the schemes of an obsessed poacher (Englund) lands a group of high school students into the midst of the man-eating crocodile "nature preserve".

The crocs are back... and they're bigger, badder and more brutal than ever. After the deadly predators' last vicious attack, the government prevented their extermination. Sealed away in a nature preserve, they've been growing to record size, awaiting their next chance to feast on human flesh. Now, when a high school swim team takes a wrong turn directly into the crocs hunting grounds... dinner is served. As the teens race to avoid the hungry reptiles, they become caught in a showdown between a rogue game warden (Yancy Butler, Kick Ass) and a demented poacher (Robert Englund, A Nightmare on Elm Street). It's the last serving of hysterical horror in a finale that shows terror is best served raw.

UHD
A 13-year-old girl named Meilin turns into a giant red panda whenever she gets too excited in Disney and Pixar's 25th feature film Turning Red, released on DVD, Blu-ray and 4K UHD 2nd May 2022 from Walt Disney Home ... END_OF_DOCUMENT_TOKEN_TO_BE_REPLACED
Top PicksView