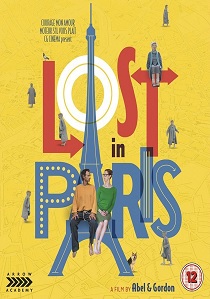 Following their festival smashes Rumba and Fairy, Dominique Abel and Fiona Gordon are back with the whimsical Lost in Paris, released on DVD and Blu-ray 4th December 2017 from Arrow Academy. Told in their signature vaudeville style, Lost in Paris is a wonderfully composed comedy that evokes the physical humour of Jacques Tati and Buster Keaton.

After receiving a letter from her visually impaired (and ever so slightly senile) Aunt Martha (Emmanuelle Riva; Amour, Three Colours Blue), Fiona takes the trip from Canada to France. Except Martha has disappeared, putting Fiona in the middle of a calamitous hunt for the missing nonagenarian. After a mishap while taking a picture at the Eiffel Tower, Fiona finds herself without any of her belongings, soaking wet and, as the title suggests, Lost in Paris. A chance meeting with a quirky homeless man, Dom, sees a relationship blossom across the city s famous sights and streets.

Playing major festivals across the world, real-life husband and wife co-star, co-direct and co-write this hilarious saunter across France's capital. With some of the funniest sight gags of modern cinema, Lost in Paris brings a heart-warming glow to the screen.