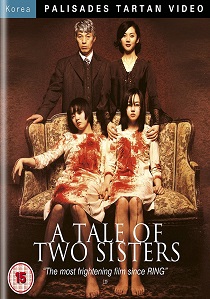 A Tale Of Two Sisters

News
News Article Go back to homepage
Recently given the Hollywood remake treatment as The Uninvited, the original shocker from writer-director Kim Ji-woon, A Tale Of Two Sisters comes to Blu-ray courtesy of Palisades Tartan on 2nd November 2009.
Unknown
Unknown
02/11/2009
Thank you for supporting DVD365.net when you order using the link(s) below. As an Amazon Associate we earn from qualifying purchases
Buy BD
Information

Recently given the Hollywood remake treatment as The Uninvited, the original shocker from writer-director Kim Ji-woon (The Good, The Bad, The Weird; A Bittersweet Life), A Tale Of Two Sisters comes to Blu-ray courtesy of Palisades Tartan on 2nd November 2009.

Based on a traditional Korean folk tale, the film is a stylish, shocking and visually arresting tale of family secrets and uncertain realities. Following the death of their mother, sisters Su-mi and Su-yeon are sent to convalesce in a mental hospital. When they are released, they are greeted by their father and taken home. Once there, it becomes obvious that this isn't the wholesome family unit that the girls' new stepmother was hoping for.

On their first night home disturbing and seemingly unexplainable events - footsteps on the stairs, doors opening of their own accord - begin to occur, and strange hallucinations plague the family. It soon becomes impossible to tell whether it is the sisters' unstable mental health, the cruel mind games played by the stepmother, or the dark presence of a supernatural force at work within the house. One of the most original horror movies in recent years, A Tale Of Two Sisters is guaranteed to have viewers gasping for breath with each successive scare as the film builds to a unique and totally unpredictable climax.

DVD
Tender and violent, terrifying and comic, The English, released on DVD 19th December 2022 from Dazzler Media., takes the arrows and bullets of its genre only to twist them into a uniquely compelling parable on gender, race, ... END_OF_DOCUMENT_TOKEN_TO_BE_REPLACED
Top PicksView