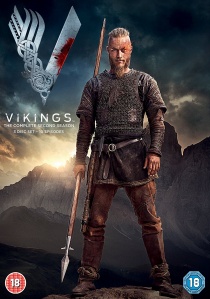 Created and written by Michael Hirst (The Tudors, Elizabeth), Metro-Goldwyn-Mayer Studios (MGM) and Twentieth Century Fox Home Entertainment are back with another season of the smash hit drama Vikings Season 2, arriving on Blu-ray and DVD on 3rd November 2014.

Vikings centre's on Ragnar (Travis Fimmel), a restless young warrior and family man who longs to find and conquer new lands across the sea and claim the spoils as his own. Now he is an Earl, allied with King Horrik (Donal Logue). With more power than ever before, his desire to sail west and explore new kingdoms remains unquenchable.

Yet there's a heavy price to pay for Ragnar's ascent to greatness. Season two brings crises of faith, power and relationships. Brothers rise up against one another. Loyalties shift from friend to foe, and unlikely alliances are formed in the name of supremacy. Ragnar's indiscretions threaten his marriage to Lagertha (Katheryn Winnick), tearing him and his beloved son apart. Plots are hatched, scores are settled, blood is spilled... all under the watchful eyes of the gods.

New to the cast of Vikings this season are Alexander Ludwig (The Hunger Games) as Bjorn, the intelligent and bold warrior son of Ragnar Lothbrok, and Linus Roache (Law & Order) as Ecbert, King of Wessex, a man of strength, knowledge and undisguised ambition. They join Travis Fimmel as Ragnar Lothbrok; Katheryn Winnick as Lagertha, a fierce shield maiden and Ragnar's wife; Clive Standen as Rollo, Ragnar's impulsive, wild, care-free brother; George Blagden as Athelstan, a young and not-so-innocent Monk; Jessalyn Gilsig as Siggy, beautiful wife of the late Earl Haraldson; Donal Logue as King Horrik, who desires to make the increasingly famous Earl Ragnar an ally and supporter; Gustaf Skarsgard, a ship builder who designs the new generation of Vikings ships; and Alyssa Sutherland as Princess Aslaug, Ragnar's new love interest.

In addition to all 10 fan-favorite episodes, the Vikings Season 2 Blu-ray and DVD include bonus features - such as Imagining and Executing Climactic Battles, a behind the scenes exploration into every aspect of planning and execution of the key battle sequences. The Blu-ray contains more than 16 hours of exclusive content and two episode audio commentaries, in which Michael Hirst and Gustaf Skarsgard dive deeper into the making of the sophomore season. You can also catch up on all of the action as the complete season 1 and 2 is released in a DVD box set edition, also out on 3rd November 2014.

UHD
When an alien with amazing powers crash-lands near Mossy Bottom Farm, Shaun the Sheep goes on a mission to shepherd the intergalactic visitor home before a sinister organisation can capture her as A ... END_OF_DOCUMENT_TOKEN_TO_BE_REPLACED
Hot PicksView