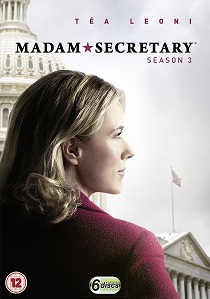 When it comes to prisoner negotiations, international aid, and thwarting the next world war, look no further than U.S. Secretary of State Elizabeth McCord (Téa Leoni). Since joining the White House staff, she's seen her fair share of global threats, but her greatest challenges lie ahead. While she and her husband Henry (Tim Daly) must outsmart their own personal stalker, new enemies emerge both overseas and in the states.

Working alongside President Conrad Dalton (Keith Carradine), Elizabeth proves not even the commander-in-chief can save the world alone. As Chief of Staff Russell Jackson (Zeljko Ivanek) ramps up his efforts at home to get Dalton re-elected, a personal crisis brings him to face his own mortality. Thankfully, Elizabeth's unwavering team, led by Nadine Tolliver (Bebe Neuwirth), helps keep the cabinet on their feet and the nation under control. In times like these, only one thing is certain: we need a woman like Elizabeth McCord!

The political firestorm heats up in 23 episodes, including special features that take you beyond the stories. Guest Stars: Enrico Colantoni (Just Shoot Me), Michael Boatman (Spin City), Cady Huffman (The Producers - won a Tony Award in 2001 for Best Actress in a Musical), John Cullum (Northern Exposure), and Tony Plana (Ugly Betty).

DVD
Arriving on DVD and Blu-ray 17th May 2021 from Acorn Media (UK), the hit police corruption drama from the makers of Bodyguard returns as Series Six of Line of Duty sees AC-12 facing their most ... END_OF_DOCUMENT_TOKEN_TO_BE_REPLACED
Hot PicksView