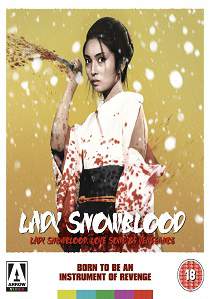 Arrow Films is pleased to announce that 24th September 2012 will see the hugely influential Lady Snowblood films lovingly restored and released on Blu-ray for the very first time, anywhere in the world.

Expertly played by the beautiful but vicious Meiko Kaji (Female Prisoner Scorpion, Blind Woman's Curse), Yuki first sets out to maim those who raped her mother and left her rotting in a stinking women's prison, where she would later die during childbirth. Trained in deadly fighting arts and masterful sword play, our new found heroine - Lady Snowblood - is cursed to wander the lands in pursuit of her targets. She is a demon of vengeance, sated only by the crimson blood of those who stole her mother from her.

Then, in the second piece of this ultra-violent pie, the stirring sequel - Lady Snowblood: Love Song of Vengeance - Yuki is caught up in the corrupt and murderous world of politics. As she works with the secret police, spying on anarchists and enemies of the status quo, expect yet more outrageous revenge and - of course - fountains of blood.

Kill Bill borrows plot lines, characters, visual motifs and scenic settings from its seminal 1970s predecessor. In particular, the character O-Ren Ishii is based on Lady Snowblood herself. The famous Kill Bill scene in which The Bride fights O-Ren Ishii uses a snowy landscape that echoes scenes in Lady Snowblood.

Lady Snowblood's theme song, Shura No Hana, sung by Meiko Kaji (translated by Tarantino as The Flower of Carnage) is also used in Kill Bill, Vol. 1. According to Kaji, Tarantino made staff on the Kill Bill productions watch DVDs of Lady Snowblood during their down time.

Beautifully restored on Blu-ray for the very first time anywhere in the world, these special Arrow reissues are a real visual treat - a must-have for any self-respecting high definition film fan. Available as both a Limited Edition Blu-ray SteelBook and a 3-disc Blu-ray & DVD Dual Format Set, these long-awaited releases will contain the following special features:

HotDVDBD
From the producers of Nobody and John Wick comes a bare-knuckle, coal-dark holiday action-comedy that says you should always bet on red as Violent Night sledges in on DVD and Blu-ray 6th March 2023 from Warner Home Video. END_OF_DOCUMENT_TOKEN_TO_BE_REPLACED
Top PicksView