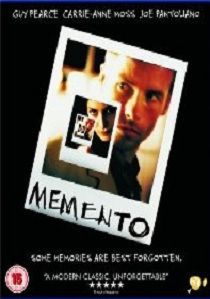 Leonard Shelby (Pearce; L.A. Confidential, The Time Machine) remembers everything up to the night his wife was brutally raped and murdered. However, since that tragedy, he has suffered from short-term memory loss and cannot recall any event, the places he has visited or anyone he has met just minutes before. Determined to find out why his wife was killed, the only way he can store evidence is on scraps of paper, by taking Polaroid photos and tattooing vital clues on his body.

Wrap your mind around an entirely unique kind of storytelling, as the film's events unfold in a non-linear way in two separate, alternating narratives. Full of exciting twists and turns, yet intelligent and darkly humorous, Memento received numerous accolades upon its original release, including Academy Award; nominations for Best Original Screenplay and Best Editing.

The Blu-ray is packed with special features including interviews with Christopher Nolan and Guy Pearce, the original Memento Mori short story narrated by writer Jonathan Nolan, Anatomy of a Scene featurette, and a Shooting Script to Film Comparison. One of the most memorable films of all time, re-visit Memento ten years on in high-definition Blu-ray from 6th September 2010.

DVD
In The Little Things, released on DVD and Blu-ray 10th May 2021 from Warner Home Video, Kern County Deputy Sheriff Joe "Deke" Deacon is sent to Los Angeles for what should have been a quick evidence ... END_OF_DOCUMENT_TOKEN_TO_BE_REPLACED
Top PicksView