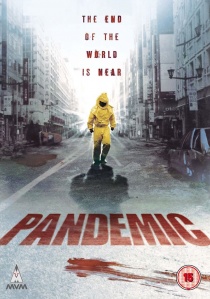 NewsThriller
News Article Go back to homepage
Japanese director Takahisa Zeze combines the apocalyptic excitement of the disaster movie with the high tension of a medical thriller in Pandemic, released on DVD by MVM on 9th May 2011, and stars veteran actor Tatsuya Fuji in a terrifyingly topical tale of a world threatened by a mysterious virus.
Takanori Takeyama, Chizuru Ikewaki, Yûji Tanaka, Ryôko Kuninaka, Rei Dan, Satoshi Tsumabuki
Takahisa Zeze
Atsuyuki Shimoda, Takashi Hirano
MVM
2 hours 18 minutes
09/05/2011
Thank you for supporting DVD365.net when you order using the link(s) below. As an Amazon Associate we earn from qualifying purchases
Buy DVD
Information

Japanese director Takahisa Zeze (Flying Rabbits; Moon Child) combines the apocalyptic excitement of the disaster movie with the high tension of a medical thriller in Pandemic, released on DVD by MVM on 9th May 2011, and stars Satoshi Tsumabuki (Dororo/; The Fast And The Furious: Tokyo Drift), Kanningu Takeyama (Memories Of Matsuko) and celebrated veteran actor Tatsuya Fuji (In The Realm Of The Senses; Empire Of Passion) in a terrifyingly topical tale of a world threatened by a mysterious virus.

When a lethal avian flu outbreak hits a small village in the Northern Philippines, the international medical team working to contain the virus hears unconfirmed reports that one of the residents has left the village to attend a relative's wedding and has taken a chicken as a gift.

Three months later, a poultry farm on the outskirts of Tokyo is found to be infected. At a nearby hospital, a patient thought to be suffering from flu tests negative for the disease but then suffers from fever, pneumonia, bleeding, diarrhoea, systemic infection and multiple organ failure. Doctors quickly determine that the cause was not avian flu. It was something much, much worse - a brand new form of flu, the likes of which has never been seen before. Early estimates suggest an outbreak of this deadly plague could infect 2.5 million people within the Tokyo area and kill around 640,000 within weeks.

Fear quickly spreads as government authorities and medical researchers race to identify and isolate the virus and to produce a vaccine. Meanwhile, as the outbreak becomes an epidemic, the death toll begins to rise far more quickly than anticipated. Japanese citizens are barred from visiting other nations and as the invisible threat takes over Tokyo, mass panic leads to chaos as martial law is imposed. In the middle of it all is the hospital where the virus was first discovered, the site now a war zone hosting a conflict between the military, the medical teams and the stricken public. Now, the race is on to save Japan and prevent a global outbreak that could lead to Armageddon.