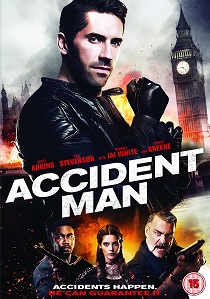 Based on the underground British comic Toxic! by Pat Mills (creator of the "Judge Dredd" comic) and Tony Skinner, this darkly humorous and stylishly violent adaptation stars Scott Adkins (Doctor Strange, The Expendables 2) as Accident Man, a stone-cold killer who must face off against a rogue's gallery of ruthless assassins in order to uncover the truth about his ex-girlfriend's murder.

Killer bonus features include audio commentary with star/producer/co-writer Scott Adkins and co-writer Stu Small and two making-of featurettes. In "Assassin's Roll Call", meet the crew of assassins that make it their mission to make their kills look like accidents and hear from Director Jesse V. Johnson, Scott Adkins and the cast on how they made every fight look like a work of art in "Violent Ballet: Filming the Fights".

Mike Fallon (Scott Adkins) is the Accident Man - a stone cold killer and the best at what he does. But when a loved one is dragged into the London underworld and murdered by his own crew, Fallon is forced to rip apart the life he knew in order to avenge the one person who actually meant something to him. Based on the popular UK comic book, Toxic!, the film also stars Ashley Greene, Michael Jai White, Ray Park, Ray Stevenson, David Paymer, Nick Moran, Perry Benson, Ross O'Hennessy and Amy Johnston.

Accident Man was directed by Jesse V. Johnson (Triple Threat, The Butcher). It was co-written by Scott Adkins and Stu Small (upcoming The Pay Up), based on the British comic by Pat Mills and Tony Skinner. It was produced by Scott Adkins, Craig Baumgarten (Universal Soldier series), Ben Jacques (iBoy), and Erik Kritzer (All Nighter).