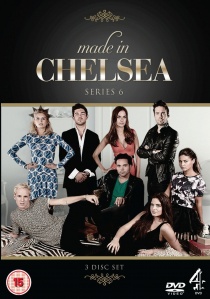 Last series, BAFTA winning Made in Chelsea left us with cliff-hangers, seething tensions and unanswered questions. Now, your favourite group of socialites and heart-breakers are back - and this time the drama is more explosive than ever. Made in Chelsea Series 6 will be available to own on DVD from 7th April 2014, courtesy of Channel 4 DVD.

With Spencer and Lucy's relationship in tatters, Spencer finds himself with two new women in his life. One is a sassy American blonde and the other he visits once a week to tell his most guarded secrets. Will either of them be able to save him from a lifetime of philandering?

Andy and Louise are on shaky ground with yet more rumours of infidelity circling the royal borough as well as Spencer casting a dark shadow over their future. Will Andy ever be able to trust her? Or has their relationship taken a hit too many? And finally, Spencer and Jamie find themselves in a familiar place - fighting for the affections of the same girl. Will the quest for victory get as ugly as it did last time? Or has one of them finally fallen in love?

Expect bigger parties, darker betrayal and bitch-fights so heated that even the ice-cold champagne won't cool you down. The latest installment of the BAFTA Award winning series will be available to own on DVD this spring.