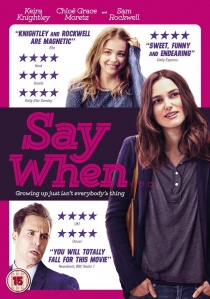 Megan (Keira Knightley, Begin Again; Atonement; A Dangerous Method) is 28 going on 14. Whilst her friends are settling down and starting families, Megan prefers to be the bridesmaid to the bride, the godmother to the actual mother. When her boyfriend Anthony proposes to her, Megan runs away from grown up life for a while and hides out with her new friend, high school student, Annika (Chloë Grace Moretz, If I Stay; Kick-Ass; Kick-Ass 2).

There follows a week of reliving the ups and downs of teenage life, though sometimes it's hard to tell who the teenager is. However, Megan finds that she must finally grow up and take responsibility when she becomes attracted to Annika's dad, Craig (Sam Rockwell, The Way, Way Back; Moon; Confessions of a Dangerous Mind).

Directed by Lynn Shelton (Your Sister's Sister, Hump Day, Touchy Feely) Say When is the perfect antidote to being a responsible grown up. Let loose your inner child and invite Say When into your living room this Spring.