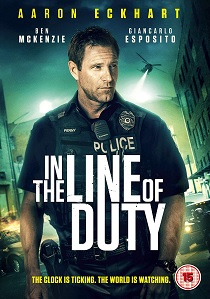 Buckle up for intense against-the-clock action as Aaron Eckhart stars in the explosive real-time thriller In the Line of Duty, from the producers of John Wick and Sicario.

With the girl's chances of survival already slim, Penny makes a fatal mistake and kills the twisted abductor, eliminating their only lead as to the girl s whereabouts. Now joined by ambitious reporter Ava (Courtney Eaton) who is live streaming the search, all hell breaks loose when the dead abductor's brother (Ben McKenzie: Gotham) arrives on the scene with a bloody thirst for revenge...

In the Line of Duty is released on DVD 24th February 2020 from Signature Entertainment.

DVD
A teenage murder witness finds himself pursued by twin assassins in the Montana wilderness with a survival expert tasked with protecting him as Those Who Wish Me Dead arrives on DVD and Blu-ray 30th ... END_OF_DOCUMENT_TOKEN_TO_BE_REPLACED
Top PicksView