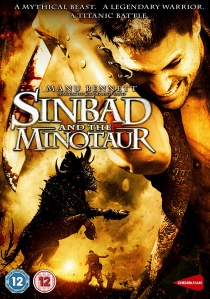 A lively combination and reimagining of familiar Greek myths and Arabic folk tales directed by Karl Zwicky (Farscape) and starring Manu Bennett (Spartacus: Blood And Sand; 30 Days Of Night) and Steven Grives (Mission: Impossible), Sinbad And The Minotaur, released by Chelsea Films on 7th February 2011, takes the illustrious sailor on a fun, irreverent romp into Hercules: The Legendary Journeys and Xena: Warrior Princess territory as he sets out to claim the long-lost gold of the gods.

Intrigued by rumours of the existence of ancient treasure hidden on a sparsely populated island, Sinbad infiltrates the desert camp of the evil sorcerer Al-Jibar intending to steal a relic that will lead him to the location of the priceless golden head of the Colossus of Rhodes. During the raid, the alarm is raised and Sinbad escapes not only with the information he needs, but also with a kidnapped princess, Tara, who Al-Jibar had forcibly enlisted into his harem. Rounding up his motley crew of pirates, and with Tara in tow, Sinbad sets sail for the mysterious island unaware that Al-Jibar and his loyal, undead and seemingly immortal henchman is hot on his tail.

Arriving at their destination, Sinbad and his men encounter the island's inhabitants who prove to be much more than meets the eye. Still, undeterred by the locals and their tendency to sprout horns and attack any unwanted visitors, Sinbad, Tara and the crew make their way to the location of the treasure - a vast, booby-trapped labyrinth guarded by the mythical Minotaur. But will Sinbad's determination and courage be enough for him to claim the prize, win the heart of Tara and get himself and his men off the island alive?