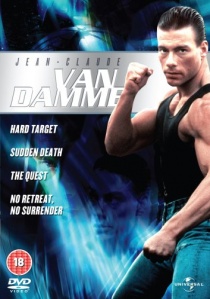 News
News Article Go back to homepage
See the man they call The Muscles From Brussels at his adrenalin pumping best in a pulsating new four DVD box set from Universal Pictures. Comprising No Retreat, No Surrender, The Quest, Hard Target and Sudden Death, The Van Damme Collection is released on 12th November 2007
Universal Pictures (UK)
Unknown
12/11/2007
Thank you for supporting DVD365.net when you order using the link(s) below. As an Amazon Associate we earn from qualifying purchases
Buy DVD
Information

Thrilling one and all with his 360-degree leaping and flying karate kicks, it's easy to see how the Belgian-born action superstar Jean Claude Van Damme captured the imagination of moviegoers worldwide. Now see the man they call The Muscles From Brussels at his adrenalin pumping best in a pulsating new four DVD box set from Universal Pictures. Comprising No Retreat, No Surrender, The Quest, Hard Target and Sudden Death, The Van Damme Collection is released on 12th November.

This groundbreaking film was not only one of the first American movies to have a predominantly Hong Kong influence in director Corey Yuen Kwai and producer Ng See Yuen, but it also gave Van Damme his first big break. Jason Stillwell (Kurt McKinney) is a self-confessed Bruce Lee fanatic. When his karate teacher is run out of town by the local crime syndicate, Jason refuses to stop training and, guided by the spirit of his hero, unlocks the secret of success in martial arts. Jason enrols at another gym only to find that it too is under threat from the same syndicate. What's more, the bad guys have a secret weapon in the formidable shape of Ivan the Russian (Van Damme). Jason realises that he must fight back or he'll be running for the rest of his life.

With Van Damme paired with action maestro John Woo (Face/Off, Mission Impossible 2), it's little wonder that many regard this as his best movie. Van Damme is the target of an evil mercenary who recruits homeless combat veterans for the 'amusement' of his clients - bored tycoons who will pay half a million dollars to stalk and kill the most challenging prey of them all - man. Laced with dark humour, packed with electrifying action and boasting a terrific baddie in the shape of Lance Henriksen, Hard Target is a thrill a minute.

Van Damme teams with Powers Boothe in a tension-packed thriller set against the backdrop of a major hockey match. Led by a villainous madman (Boothe), a group of terrorists takes over a sports arena during the sold-out Stanley Cup finals, holding the Vice President of the United States hostage and threatening to blow up the stadium if they don't receive $1 billion by the end of the game. A fireman (Jean-Claude Van Damme), whose daughter is one of the hostages, must conquer his fears and race against time to save his child - and thousands of innocent spectators - before the terrorists carry out their deadly threat.

Jean-Claude Van Damme directs and stars in this fast moving and exotic adventure that takes him from the slums of New York to the mysterious Lost City of Tibet. The year is 1925. On the run from the police, petty criminal Chris DuBois (Van Damme) ends up enslaved on a cargo ship. Freed by a mercenary Englishman, Lord Dobbs (Roger Moore), he ends up being bartered to an island native who trains fighters for the Ghan-Gheng. This legendary, 'special invite only' tournament pits the world's deadliest fighters against each other in a winner takes all test of skill and courage. Forced to compete, DuBois faces the ultimate test - one where one wrong move could cost him not only the competition, but his life.

DVD
For the first time in the cinematic history of Spider-Man, our friendly neighborhood hero's identity is revealed in Spider-Man: No Way Home, released on DVD, Blu-ray and 4K UHD 4th April 2022 from Sony Pictures Home ... END_OF_DOCUMENT_TOKEN_TO_BE_REPLACED
Top PicksView