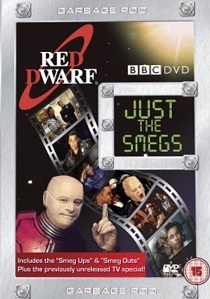 Just when you thought this Autumn couldn't get any better, 2entertain and Grant Naylor Productions are chuffed to bits to announce the release of Red Dwarf: Just the Smegs, released on DVD on 19th November 2007.

But it doesn't stop there. Because we know what you're like - you crazy completists, you - we're also including the home video versions of the Series VII and Series VIII Smeg Ups. (As opposed to the DVD versions, which featured their own special opening titles.)

And if that weren't enough, the package will be rounded off with The Smeg Ups: Broadcast Edition. This half-hour version was created for Red Dwarf Night in 1998 and featured Kryten, Lister and Rimmer introducing outtakes from the first seven series. (Not to mention a clever introduction showing Lister falling off his cradle as he paints the ship...)