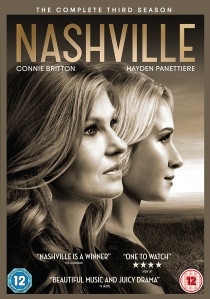 This time it's bigger, bitchier and ballsier than ever before. Created by Academy Award ® Winner Callie Khouri (Thelma & Louise), the songs, the scandals, the loves, the lives, the rivalries and the confessions continue in the cut-throat world of Country music's capital city as Nashville - Season Three arrives on DVD on 12th October 2015, courtesy of Lionsgate Home Entertainment.

In this season, Rayna (Connie Britton) tries to decide once and for all between the two men in her life - Deacon (Charles Esten) and Luke (Will Chase). Meanwhile, Deacon receives some bad news and Juliette (Hayden Panettiere) comes to a realisation about her pregnancy.

In this third season the multiple Golden Globe nominated Nashville still has it all: top notch acting talent, an incredible cast of characters, riveting storylines, music that amazingly just gets better episode by episode and amazing A-List guest stars.

Tackling the trauma of show business, the heartache of love lost and relationships frayed, we love and love to hate the characters that make up Nashville just as much as they do, which makes every episode the equivalent of living out a classic country song!

DVD
The end of the line is only the beginning in a wild, non-stop thrill ride through modern-day Japan as Bullet Train is released on DVD, Blu-ray and 4K UHD 24th October 2022 from Sony Pictures Home Entertainment END_OF_DOCUMENT_TOKEN_TO_BE_REPLACED
Top PicksView