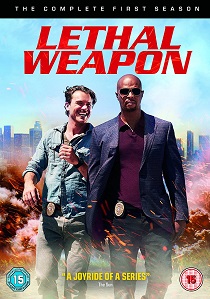 Based on the hit movie franchise, Lethal Weapon, released on DVD and Blu-ray 25th September 2017 by Warner Home Video, tells the story of a slightly unbalanced former Navy SEAL joining forces with a veteran detective as partners on the Los Angeles police force.

Roger Murtaugh (Damon Wayans) and Martin Riggs (Clayne Crawford) are back on the streets of L.A., in Warner Bros. Television's adaptation of the classic buddy cop action-comedy. The series introduces these two polar opposites: Riggs a volatile former Navy SEAL-turned-detective out of El Paso, Texas with a tendency to dive into the line of fire following the tragic deaths of his wife and unborn son; and Murtaugh, a seasoned, by-the-book detective cautiously returning to the LAPD in the wake of a heart attack that nearly killed him. While the partnership seems doomed from the start, the dynamic is crazy enough that it just might work. The question remains... can the two of them work together to protect the crime-ridden streets of Los Angeles, or will Riggs get the two of them killed first?

With Blu-ray's unsurpassed picture and sound, Lethal Weapon: The Complete First Season Blu-ray release will include 1080p Full HD Video with DTS-HD Master Audio for English 5.1. The 3-disc Blu-ray will feature a high-definition Blu-ray of all 17 episodes from Season One.