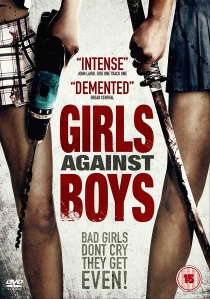 NewsComedyHorrorThriller
News Article Go back to homepage
After a series of bad experiences with men, Shae teams up with her co-worker, Lu, who has a simple, deadly way of dealing with the opposite sex in Girls Against Boys, released on DVD by Arrow Films on 8th June 2015.
Reyna de Courcy, Caroline Lagerfelt, Liam Aiken, Matthew Rauch, Danielle Panabaker, Nicole LaLiberte
Austin Chick
Daniel Sollinger, Aimee Shieh, Clay Floren
Arrow Films
1 hour 29 minutes
08/06/2015
#GirlsAgainstBoys
Thank you for supporting DVD365.net when you order using the link(s) below. As an Amazon Associate we earn from qualifying purchases
Buy DVD
Information

After a series of bad experiences with men, Shae (Danielle Panabaker) teams up with her co-worker Lu (Nicole LaLiberte) who has a simple, deadly way of dealing with the opposite sex.

There's much more to Girls Against Boys than the usual revenge story. Not only does it have the smarts to pull apart the genre to create something entirely new and subversive - treading the line between Natural Born Killers and Kill Bill - it also has slick production values making for a glossy, high quality thriller without losing any of the grit.

Stunningly shot and featuring a cast of breakout stars, this tale of sex, sisterhood, and ultra-violence is not to be missed!

HotUHD
StudioCanal is thrilled to announce that the iconic cult classic, Highlander, is being released to own on 4K UHD for the very first time 31st October 2022 with brand-new artwork from celebrated artist Matt Ferguson. END_OF_DOCUMENT_TOKEN_TO_BE_REPLACED
Top PicksView