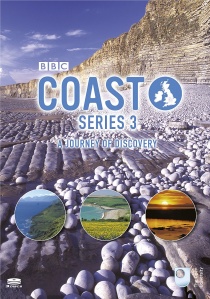 The BAFTA awarding winning Coast returns to BBC Television and DVD this summer with Coast Series 3, boasting the most ambitious and spectacular explorations of Britain's coastline to date, released on DVD by Contender Home Entertainment on 9th July 2007.

Coast's familiar team of experts - archaeologist and author Neil Oliver, doctor and anatomy expert Alice Roberts, archaeologist Mark Horton, zoologist Miranda Krestovnikoff, geographer and journalist Nicholas Crane - will be on hand once again to guide viewers through eight more journeys around the most extreme edges of the British Isles.

As well as revisiting some favourite stretches of shoreline to discover further untold stories, Coast Series 3 will also explore a host of brand new territories. Joining the team this time around as regular presenters will be earth scientist Hermione Cockburn (winner of the BBC Talent Science on Screen competition) and engineer and It's Not Easy Being Green presenter Dick Strawbridge.

Highlights of this brand new series see Neil joining an expedition to climb Orkney's Old Man of Hoy, a terrifying vertical column of sheer rock that remained unconquered until 1966, while Miranda joins the families of dolphins who visit to the Welsh coast to raise their young. Nicholas Crane unearths stories of massive mudslides in Lyme Regis and a seven thousand-year-old tsunami that once devastated Britain, and Alice visits the only place on earth where Arctic and Mediterranean plants grow side by side.

From the northernmost tip of Britain, on Shetland, to the continental charms of the Channel Islands, from the fiercely independent Isle of Man, to the breathtaking south-west corner of Ireland, Coast Series 3 utilises expert commentary, contemporary storytelling, computer-generated images and breathtaking aerial photography to reveal the remarkable stories of what happens when land, sea, and people come together.

UHD
Evil resurfaces in Derry as director Andy Muschietti reunites the Losers Club in a return to where it all began with IT Chapter Two, the conclusion to the highest-grossing horror film of all time, ... END_OF_DOCUMENT_TOKEN_TO_BE_REPLACED
Hot PicksView