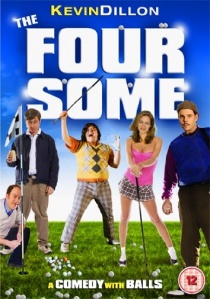 Directed by William Dear (The Perfect Game; Simon Says; Angels In The Outfield; Harry And The Hendersons) and based on an original play by acclaimed Canadian playwright, Norm Foster, The Foursome, released on DVD by Showbox Home Entertainment on 7th June 2010, stars Kevin Dillon (Entourage), John Shaw (Watchmen), Chris Gauthier (Harper's Island) and Paul Jarrett (The Grudge 2) in a comic tale of four former college buddies who find out just who their friends really are when they hook up for a game of golf during the weekend of their quarter-century college reunion.

Old friends Rick Foster (Dillon), Cameron Towers (Shaw), Donnie Spencer (Gauthier), Ted Renton (Jarrett) and their respective wives and girlfriends are reluctantly brought together to celebrate the 25th anniversary of their leaving college and quickly discover that while life has taken them in very different directions, old rivalries die hard. Meeting up with many of the characters that made their college years memorable, it seems for the guys that not much has changed except for a few receding hairlines and slightly larger waistlines.

As the girls spend the first full day of the reunion bonding over drinks and sessions at the spa, the middle-aged 'boys' get aggressively competitive out on the golf course, where sporting pride is at stake and impressing old flames becomes a priority. More importantly, there's money riding on every hole and, with the pressure to win mounting, not even the dirtiest of tricks are out of bounds as the precious prize and bragging rights are up for grabs!

A sporting comedy in the tradition of Caddyshack and Happy Gilmore, The Foursome is a witty and entertaining look at the vagaries of love, friendship and sportsmanship.

UHD
With all the heart and humour audiences expect from Walt Disney Animation Studios, Big Hero 6, released on 4K UHD for the first time 30th August 2021 and exclusive to Zavvi, introduces you to a ... END_OF_DOCUMENT_TOKEN_TO_BE_REPLACED
Top PicksView