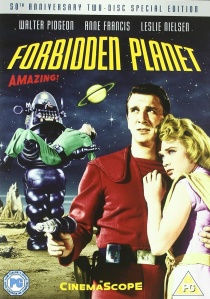 Legendary science-fiction classic Forbidden Planet set a new standard for the genre when it was released in 1956 and its pioneering use of special effects influenced many cinematic space voyages that followed including George Lucas' Star Wars and TV series Star Trek. Now Warner Home Video is releasing a two-disc special edition on 18th June 2007.

Loosely based on Shakespeare's The Tempest, Forbidden Planet features film sets of extraordinary scale and the first all-electronic musical soundscape in film history. This two disc special edition boasts a new digital transfer from restored picture elements, a re-mastered Dolby Digital 5.1 soundtrack, deleted scenes, a spin-off movie, three documentaries and more, so that audiences can experience this masterpiece as never before.

Commander Adams (Leslie Nielsen) and his crew set out to investigate the disappearance of a colony of scientists on the planet Altair-4. After landing, they discover only two survivors, Dr. Edward Morbius (Walter Pidgeon) and his beautiful daughter Altaira (Anne Francis). They live a surprisingly prosperous lifestyle, attended to by Robby the Robot, a super-butler who speaks 188 languages and performs many amazing feats. But among Altair-4's many wonders, none is greater or more deadly than the human mind.