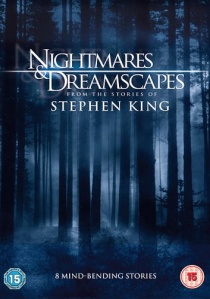 News
News Article Go back to homepage
The undisputed heavyweight champion of horror returns to DVD with a collection of hour-long dramas that are guaranteed to have you sleeping with the lights on! Warner Home Video is proud to announce the release of Stephen King's Nightmares & Dreamscapes on DVD from 16th April 2007.
Warner Home Video
Unknown
16/04/2007
Thank you for supporting DVD365.net when you order using the link(s) below. As an Amazon Associate we earn from qualifying purchases
Buy DVD
Information

The undisputed heavyweight champion of horror returns to DVD with a collection of hour-long dramas that are guaranteed to have you sleeping with the lights on! Warner Home Video is proud to announce the release of Stephen King's Nightmares & Dreamscapes on DVD from 16th April 2007.

In true King style, Nightmares & Dreamscapes explores alternative visions of what human existence could be like at its worst. Toy soldiers avenge the death of their creator by attacking a hit man; an author of hard-boiled detective stories swaps places with one of his characters; two young newly-weds on their honeymoon get lost in a mysterious London neighbourhood; a man witnesses his own autopsy; and a couple end up in a place inhabited by dead rock 'n' roll legends - that's the stuff Nightmares & Dreamscapes is made of.

Battle Ground A professional assassin from California executes the owner of a toy factory in Texas. Upon returning home he is surprised to receive a consignment of toy soldiers in the post. When the soldiers go missing he thinks nothing more of it - until gunfire erupts from beneath the sofa. A thrilling battle for survival follows - but unknown to the assassin, the soldiers have the ultimate weapon at their disposal.

Crouch End Workaholic couple Lonnie and Doris accept an invitation to a dinner party in Crouch End, despite a taxi driver's dire warning that Crouch End is best avoided. As soon as the couple arrives they find that they are lost in a town inhabited by strange cats with half-demonic faces and children with deformed hands. Strange and scary events happen around them as the cabbie's predictions come true.

Umney's Last Case William H Macy stars as Sam Landry, a crime writer who, along with his wife Linda (Jacqueline McKenzie), sinks into dejection and sorrow when their son drowns. Landry, weary with his own existence and longing for escapism, yearns to change places with his fictional character Umney and live in 1930s Vegas. Events soon take a terrifying turn but will both creator and creation be able to return to their original habitats?

The End Of The Whole Mess A video journal records the last hours of celebrated film-maker Howard Fornoy (Ron Livingston), who tells the story of his incredibly gifted younger brother Bobby (Henry Thomas), a renowned scientist. Disgusted by the violence and bloodshed caused by humans, Bobby plans to rid the whole of mankind forever of the evil of aggression but realises too late that eternal peace comes at a terrible price.

The Road Virus Heads North Tom Berenger plays 50-year-old Richard, a best-selling novelist besieged at book signings by fervent fans. After a disturbing medical diagnosis Richard happens upon a macabre painting at a flea market. He buys it, unaware of the horrors that are about to envelop him...

The Fifth Quarter Returning home to his wife Karen (Samantha Mathis) and his son Jackson after a seven year stretch inside, Willie intends to go straight. But when his former cell-mate Barney turns up outside Willie's trailer, half-dead and dripping with blood, he is compelled to listen to the dying man's story. What follows is a bloody revenge mission with a huge hidden treasure at stake.

Autopsy Room Four Howard (Richard Thomas) is bitten by a snake and temporarily paralysed by the venom. Mistakenly pronounced dead, we are privy to his thoughts through a voiceover running through his mind. As the tension increases and his initial bewilderment turning to shock, Howard faces a living nightmare: paralysed, unable to speak or move, the doctors are about to perform his autopsy.

You Know They've Got A Hell Of A Band Clark and Mary are on a road trip through Oregon. On reaching a crossroads Clark opts to head down the right-hand fork, ignoring Mary who just wants to turn around and head back to the last town. As the road narrows, the skies darken and Mary glimpses a strange creature moving around in the forest they realise, too late, that her hunch was correct...

BD
In a touching black and white film directed by Mike Mills, starring Joaquin Phoenix, C'mon C'mon, released on DVD and Blu-ray 28th February 2022 from Entertainment in Video, explores family, grief, and the bonds that bring us ... END_OF_DOCUMENT_TOKEN_TO_BE_REPLACED
Top PicksView