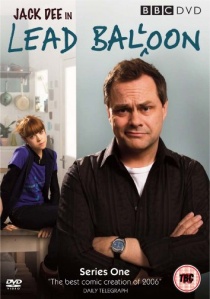 Starring Jack Dee, one of the UK's most successful stand-up comedians, Lead Balloon is a comedy series with a difference. First aired in 2006 on BBC 4, Lead Balloon became an instant smash hit with fans and critics alike, leading to a repeat in prime time on BBC2.

Rick Spleen (Jack Dee) is a disillusioned stand-up comedian and writer whose career has not gone the way he had planned. Hosting corporate events such as The Heating and Ventilation Awards and appearing on second-rate daytime chat shows was not what he dreamed of as a young man. Worse still, he's stuck with a lousy stage name that he chose 20 years ago.

Rick and Marty, his quick-talking American co-writer, spend their days arguing about every subject under the sun, drinking too much coffee, and devising work avoidance strategies. Further distractions are provided by Magda, Rick's Eastern European home help, his show-biz agent wife Mel and their 17 year old daughter Sam who would be the world's least motivated human being, were it not for her boyfriend, Ben.

Whether he is being accused of putting on weight, suspected of being gay, or worried about accidentally poisoning another performer, Rick combines a mass of neuroses and petty grievances with a terrible propensity for lying - it is not a recipe for success.

Lead Balloon is co-written by Jack Dee and Pete Sinclair and the entire first series is released on DVD on 12th November 2011 from 2entertain. Complementing the six laugh-out-loud episodes, are a host of extras including audio commentaries, exclusive behind-the-scenes footage, cast interviews, bloopers and five deleted scenes.

The second series of Lead Balloon will be broadcast on BBC Two this autumn.