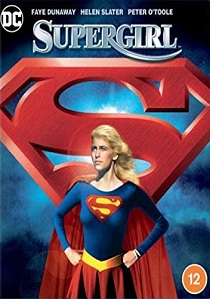 Ilya and Alexander Salkind continue to bring the lore and legend behind the World's Greatest Super Hero to the big screen in this rare Director's Cut on a bonus DVD.

Follow-up to the beloved Christopher Reeve Superman films, Helen Slater (in her screen debut) stars as the sensational Supergirl! Though Superman grew up believing himself to be the Last Son of Krypton, part of his home planet survived: Argo City, home of his uncle, Zor-El (Simon Ward), and Zor-El's wife, Alura (Mia Farrow).

Saved by the wizardry of Zaltar (Peter O'Toole) and the Omegahedron, their daughter Kara comes of age as a Kryptonian when a disaster whisks the Omegahedron to her cousin's adoptive planet, Earth. Dispatched to rescue it from the clutches of the evil sorceress Selena (Faye Dunaway), Kara must tackle a steep learning curve so that she can pass the test as both mild-mannered schoolgirl Linda Lee and Supergirl!

BD
A stellar cast sizzles in Heat, a taut psychological drama about an obsessive detective and a brilliant thief whose fates are linked in the aftermath of a high-stakes securities heist, released on 4K UHD 8th August 2022 from ... END_OF_DOCUMENT_TOKEN_TO_BE_REPLACED
Top PicksView