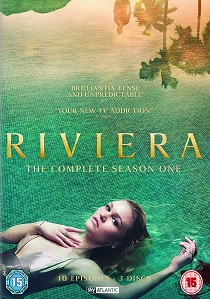 Created and co-written by Academy Award winner Neil Jordan (The Crying Game, Mona Lisa), Sky Original Production Riviera follows the story of Georgina Clios (Stiles), the smart and resourceful second wife of a billionaire banker who dies in a yacht explosion - a catastrophe that sets in motion a dramatic chain of events that exposes the darker flipside to the Riviera's glitz and glamour.

The 10-part thriller follows the moral descent of smart and resourceful art curator Georgina Clios (Stiles), who discovers her vast fortune is tainted by dishonesty, double-dealing and murder when her billionaire husband is killed in a mysterious explosion on board a Russian oligarch's yacht. As she sets out to uncover what happened, stark truths about her husband emerge and she is led deep into the dark world of the Riviera's super-rich. There, she must learn to adapt, survive and ultimately thrive if she is to save the Clios family and fortune from both its enemies and itself.

The story also examines the multi-million-dollar world of contemporary art, which offers a thematic strand-what is real, what is beauty, what is value? The arbitrary nature of the answers to these questions mirrors the moral ambiguity of all our characters, most of all Georgina.

HotDVDBD
From the producers of Nobody and John Wick comes a bare-knuckle, coal-dark holiday action-comedy that says you should always bet on red as Violent Night sledges in on DVD and Blu-ray 6th March 2023 from Warner Home Video. END_OF_DOCUMENT_TOKEN_TO_BE_REPLACED
Top PicksView