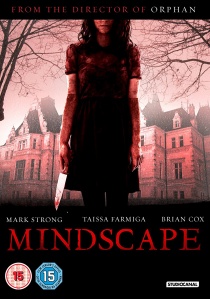 Mindscape, released on DVD by StudioCanal on 25th August 2014, is a brand new horror thriller with an A-list cast about a 'Memory Detective' with an ability to enter people's minds. He takes the case of a brilliant but troubled sixteen-year-old girl to determine whether she is a sociopath or a victim of trauma. The longer their sessions continue the more horrific events become.

Mark Strong (Tinker Tailor Soldier Spy), in his first leading role in a feature film, plays John, a mind detective paid to enter people's memories and uncover the reality behind their alleged crimes. But what will he make of his new assignment, the brilliant but troubled teenager Anna? Played with effortless panache by one of America's best upcoming talents - American Horror Story's Taissa Farmiga.

As John enters her mind and becomes more involved in her sometimes brutal memories, he must decide if she is indeed the victim of unspeakable trauma or a very clever and manipulative sociopath. Produced by Jaume Collet-Serra (Orphan, Unknown, Non-stop), Mindscape is a suspenseful horror with a fantastic twist...