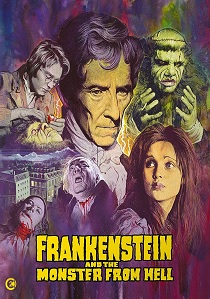 Frankenstein and the Monster From Hell (1974)

The final Hammer horror from acclaimed director Terrence Fisher, and the last in the series of eight Frankenstein films for the company, Frankenstein And The Monster From Hell was originally released in 1974, and now the chilling pivotal horror gets its Limited Edition box set release, complete with a slew of special features on 29th August 2022 courtesy of Second Sight Films.

The iconic Peter Cushing returns as the legendary Baron in hisseventh outing, alongside Patrick Troughton ahead of his incarnation as the second Doctor Who, as well as a host of stellar British acting talent including the mighty Dave Prowse (Star Wars) as Frankenstein's creation, who also happens to be the only man who played this role twice for Hammer, in two very different manifestations.

When a young doctor, Simon Helder (Shane Briant - Time Traveller) is committed to an insane asylum where the legendary Baron Frankenstein supposedly perished after being found experimenting on stolen corpses, he is quickly taken under the wing of mysterious Doctor Victor (Peter Cushing).

But Simon quickly realises that there's more than meets the eye with Doctor Victor, and that Frankenstein is alive and well and is continuing his macabre experiments...

This grisly, gothic Hammer production is a thought-provoking and stylish closure to the Frankenstein anthology, featuring another superb turn from Peter Cushing and boasting oodles of bloodshed, and spectacularly frightful moments.