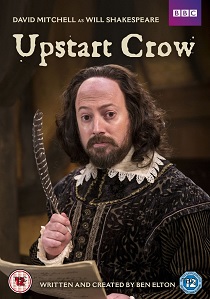 Based on the facts we know about William Shakespeare, Ben Elton's sitcom Upstart Crow, released on DVD by BBC Worldwide on 20th June 2016, is about the life of the world's favourite bard as it just might have been.

It's the 1590s and Will (David Mitchell) is still at the start of his career. In London his plays are looked down on by his sinister rival Robert Greene, while his friends and fellow actors are baffled by Will's weird new ideas. He's not taken very seriously in Stratford either, where his mum and dad say his plays are boring, his teenage daughter makes fun of his flowery language and his wife Anne wonders how he can claim to be a great writer when he can't even find his quill.

Packed with gags and sparkling wordplay, Upstart Crow pays comic homage to the greatest writer in the history of the English language - and reveals some rather surprising stories about where his best ideas came from...