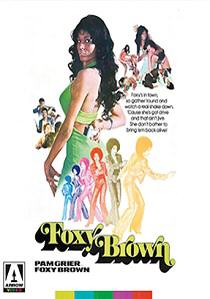 A true innovator of America's exploitation genre, Arrow Video will also be releasing another of his trademark films, Spider Baby, on Blu-ray in the coming weeks.

The super-deluxe package, which is available both as a standard Blu-ray and as a limited edition Blu-ray steelbook, is LOADED with special features and bonus material. Keeping with what is a now a fan-favoured tradition of Arrow Video restorations, Foxy Brown will come complete with a reversible sleeve, featuring the original 1974 artwork and a stunning new illustration from The Red Dress.

When Foxy Brown's undercover-agent boyfriend is gunned down on the orders of evil drug kingpins, she stops at nothing to exact a thrillingly brutal revenge. After linking her boyfriend's murder to a so-called "modelling agency", Foxy poses as a prostitute to infiltrate the company, saving fellow black women from a life of drugs and sexual exploitation in the process.

Pam Grier was given the role of a lifetime as the street-smart yet intensely sexy Foxy, modelling a stupendously varied range of Seventies threads while righteously kicking villainous white butt at every opportunity. With an incredible supporting cast, a suitably funkadelic soundtrack and just the right balance of sex and violence, Foxy Brown is still, undisputedly, the meanest chick in town. This is one of the all-time great Blaxploitation films, pulling out all the stops at a time long before anyone had thought of political correctness.

The director-approved Special Features included on the deluxe editions of Foxy Brown are as follows:

UHD
Based on the global blockbuster videogame franchise from Sega, Sonic The Hedgehog, released on DVD, Blu-ray and 4K UHD from 8th June 2020 from Paramount Home Entertainment, tells the story of the ... END_OF_DOCUMENT_TOKEN_TO_BE_REPLACED
Hot PicksView