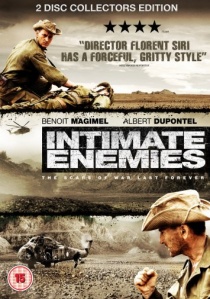 Praised during its theatrical release by The Daily Mirror for its "slick action scenes" Florent Emilio Siri's "harrowing" (Empire Magazine) and "horrifically disturbing" (The Independent) war movie, Intimate Enemies comes to DVD on 9th June 2008 from Contender Films as a special two-disc release loaded with extra features that provide an informative and comprehensive look at the making of the film and the real-life background to the story.

Inspired by Patrick Rotman's book and subsequent documentary concerning the personal and psychological effects of the 1954-62 Algerian War of Independence on the soldiers involved in the conflict, Intimate Enemies is an uncompromising and brutally realistic war movie dramatizing the experiences of a platoon of French soldiers fighting the 'fellaghas' of Algeria's National Liberation Front in the country's remote mountain region.

Assigned to lead a battalion of French soldiers following the friendly-fire killing of his predecessor, the highly principled but naïve Lieutenant Terrien (Benoît Magimel) is determined to wage war in the most morally sound and humanistic way he can. But his approach is viewed with scorn by many of those under his command, in particular the battle-hardened Sergeant Dougnac (Albert Dupontel). A veteran of the Indochina War, Dougnac is not averse to resorting to torture and barbarism when it comes to dealing with insurgents. As a series of violent skirmishes takes a devastating toll on Terrien's men, and the savagery of the enemy becomes apparent, the idealist Lieutenant is forced to re-evaluate his stance, even if it means compromising his beliefs.

Described by The Times as an "emotive tale" that "packs a punch", Intimate Enemies is a provocative war movie that serves a suitable companion piece to both Gillo Pontecorvo's The Battle Of Algiers and Rachid Bouchareb's Days Of Glory.