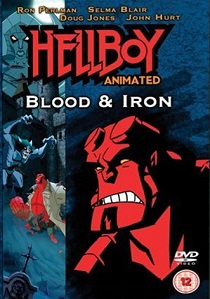 If that wasn't enough, Hellboy Animated: Blood & Iron comes complete with some amazing extras, including The Penanggalan, an exclusive Hellboy E-comic by Mike Mignola, the debut of Iron Shoes, a brand-new Hellboy animated short written by Mignola and featuring the vocal talents of Ron Perlman and Dan Castellaneta (the voice of Homer Simpson), and a "making of" featurette that includes interviews with Mignola, Stones and del Toro, amongst others.

In 1939, young Professor Broom managed to destroy Erzsebet Ondrushko, a female vampire rumoured to have drank and bathed in the blood of innocent young women in order to survive and retain her looks. Now someone in upstate New York is trying to bring her back from the dead and the elderly Professor Broom has decided to investigate the case himself. He takes along with him the top BPRD agents, Hellboy, Liz Sherman, Abe Sapien, and new agent, Sydney Leach, all of whom are more worried about Broom's welfare than the return of any vampire. Their concern soon changes, however, when they face a horde of ghosts, a phantom wolf pack, witches, harpies, a giant werewolf and the newly risen Erzsebet herself. But that's not all. Hellboy also ends up having to slug it out with the goddess Hecate, Queen of Witches, who wants him to embrace his true destiny, one that includes the destruction of mankind.

Capturing the spirit of Mike Mignola's original vision more accurately and faithfully than any movie or animated version of Hellboy to date, Hellboy Animated: Blood & Iron is a must-see for all comic book and sci-fi/horror movie fans.

DVD
A 13-year-old girl named Meilin turns into a giant red panda whenever she gets too excited in Disney and Pixar's 25th feature film Turning Red, released on DVD, Blu-ray and 4K UHD 2nd May 2022 from Walt Disney Home ... END_OF_DOCUMENT_TOKEN_TO_BE_REPLACED
Top PicksView