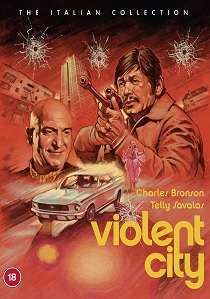 Starring Charles Bronson (Once Upon A Time In The West, Death Wish) and Telly Savalas (The Dirty Dozen, Horror Express) this early Italian Poliziotteschi movie directed by Sergio Sollima, blasts its way across the screen in a bloody crime thriller of revenge and retribution.

After being framed for a murder following a bloody shoot out, assassin Jeff Heston is finally released from prison where he immediately sets about seeking the pair who betrayed him. However, when he refuses to accept an offer to join the gang which set him up in the first place, Heston finds himself murderously pursued through the streets of New Orleans.

Like the spaghetti westerns from a few years earlier, Violent City places its protagonist against the mercy of a corrupt system in a violently entertaining story full of twists, turns and surprises.

Related Articles
Red Sun, The Great Escape, Once Upon A Time In The West
On Her Majesty's Secret Service
Comments
BD Releases News Pick