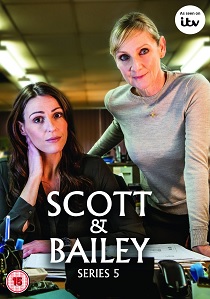 Ordinary women, an extraordinary job... Back for a fifth series, Scott and Bailey is the thrilling investigative drama exploring the personal and professional lives of two female detectives, from award-winning writer Sally Wainwright (Happy Valley) and Diane Taylor.

Detective Constables Janet Scott and Rachel Bailey both work for Manchester Metropolitan Police's prestigious Major Incident Team, led by the formidable DCI Gill Murray. Despite the obvious differences between them, the fact that they are often thrown together in difficult situations means they have developed a robust friendship. Though dedicated to cracking their challenging cases, Scott and Bailey also have to juggle their home lives away from the force, fraught with personal dramas, decisions and life-changing consequences that test their friendship to the limit.

This series sees Janet and Rachel investigate the sinister world of the Darknet, a place that offers complete anonymity to its users. A ruthless game is being played - one man challenges another to murder, leaving a chalk mark at the scene as proof. The images are loaded to a website and the baton is passed to the next killer. As more chalk marks are left, identifying more victims, will Janet and Rachel be able to stop these vicious killers before it's too late?

Scott and Bailey: Series 5 is releaed by BBC Worldwide on 2nd May 2016. A box set of Series 1-5 will also be released on the same date and also includes a Behind the Scenes feature.

A fatally ill man tries to secure the future of his family in a world where the toxicity of the sun forces people to stay inside during the daytime in LX 2048,released on DVD and Blu-ray 15th February 2021 from Dazzler Media.
Movie quote