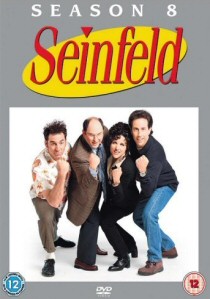 Season Eight of the ever-popular and universally acclaimed comedy series Seinfeld sees more of the antics that have made Jerry and the gang comedy heroes to legions of fans. Released on DVD on 4th June 2007, courtesy of Sony Pictures Home Entertainment.

Packed with hours of incredible special features including interviews with the cast, deleted scenes, featurettes, blooper reels, episode commentaries and exclusive stand-up footage, this release is a must-have title for all fans of the Golden Globe and Emmy Award-winning series.

Season Eight features 24 classic episodes of the show, including some of the fans' favourites such as The Bizarro Jerry, where Jerry is initially attracted to one of Elaine's friends until he notices her 'man hands' and The Summer Of George, in which George celebrates a windfall by living it up for the duration of the summer. Other highlights include The Checks, The Andrea Doria and the hilarious The Yada Yada.

Created by Jerry Seinfeld and Larry David (Curb Your Enthusiasm), Seinfeld first aired on British television in 1993 on BBC2 and quickly built up a cult following, attracting audiences in excess of 500,000.

Also starring Jason Alexander (George), Michael Richards (Kramer) and Julia Louis Dreyfus (Elaine), the release of Season Eight will be greeted with applause from the series' huge number of fans.

HotDVDBD
An impending apocalypse raises the stakes and shatters the boundaries of time and space in Marvel's Agents of S.H.I.E.L.D. - The Complete Fifth Season, arriving on DVD and Blu-ray 1st October 2018 from Walt Disney Home Entertainment. END_OF_DOCUMENT_TOKEN_TO_BE_REPLACED
Top PicksView